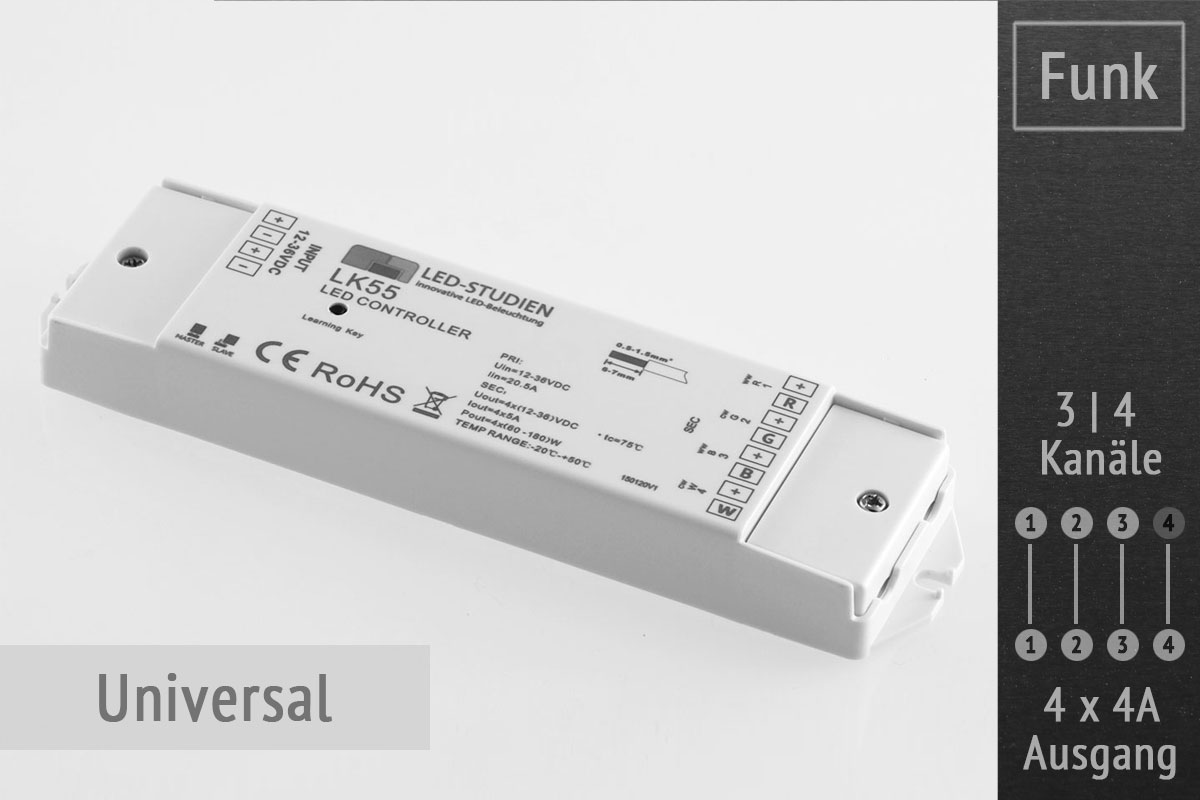 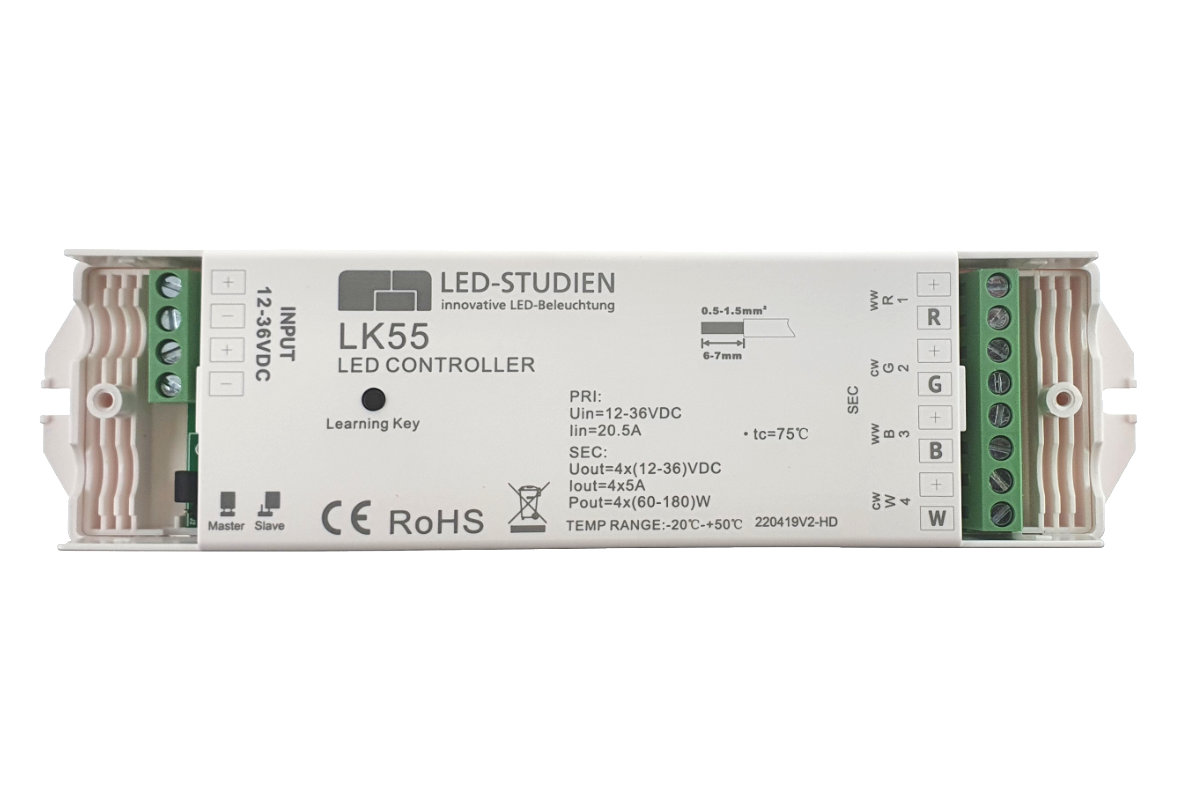 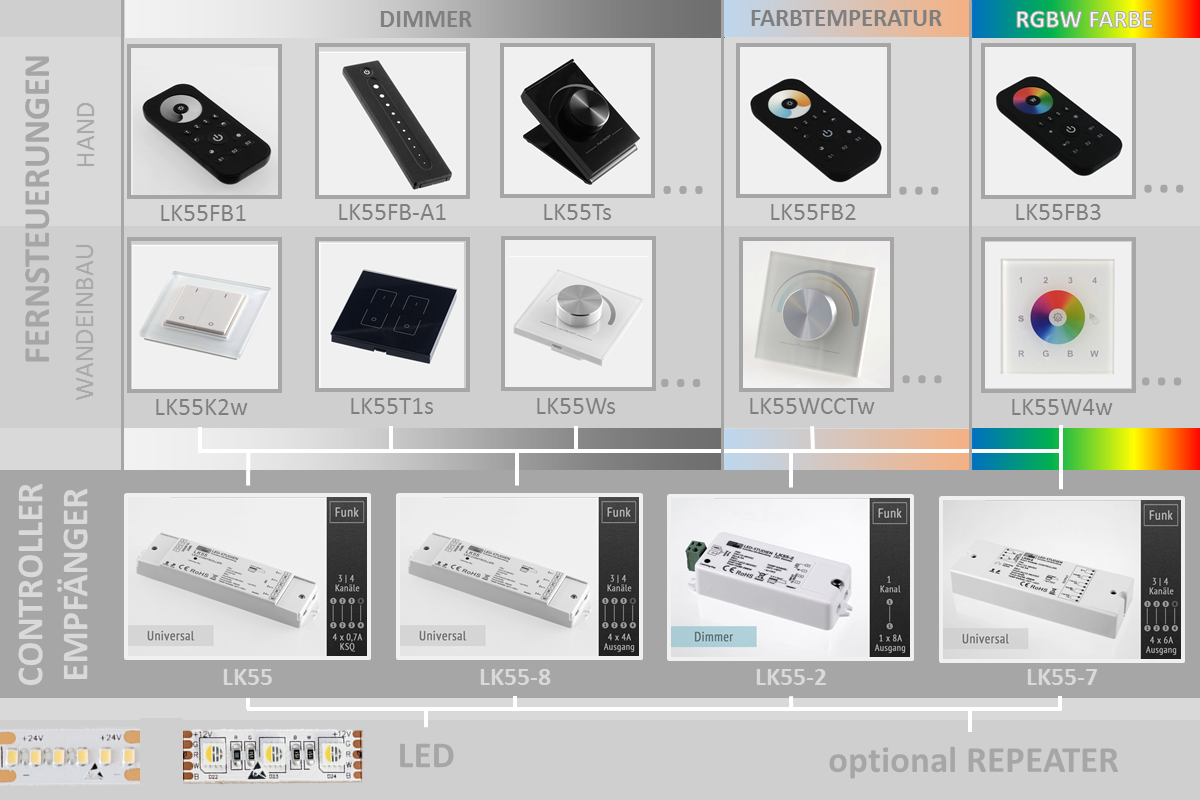 Universal driver with 4 outputs, each capable of carrying 4 amps.

When used as a dimmer, 4 parallel outputs are available, which are controlled identically. The designations "RGBW" and "cw" and "ww" can be ignored in this case.

When used as a color temperature driver, 2 outputs each are available for warm white ("ww") and cool white ("kw") LEDs. Note the corresponding labeling on the driver.

When used as an RGB(W) driver, the 4 outputs take over the separate control of the red (R), green (G), blue (B) and possibly white (W) LEDs. The outputs are labeled accordingly.

The driver is installed between the power supply and the LED components (e.g. LED strips, LED panels).

All drivers of our LK55 series remember the last setting even in case of power loss.

If you want to operate several light zones independently of each other, several drivers are always necessary. Drivers with several outputs (like here 4 x 4A) are not suitable to operate several zones, because the outputs can only be controlled together (parallel).

Note: The driver has double voltage inputs (++--). For high connected load (> 200 Watt), use our special connection cables for high connected loads (> 200 watts) in order to divide the current load between the two inputs. The large power supplies HLG-480 and HLG-600 already have double voltage outputs, so that both voltage inputs of the driver can be used directly here. 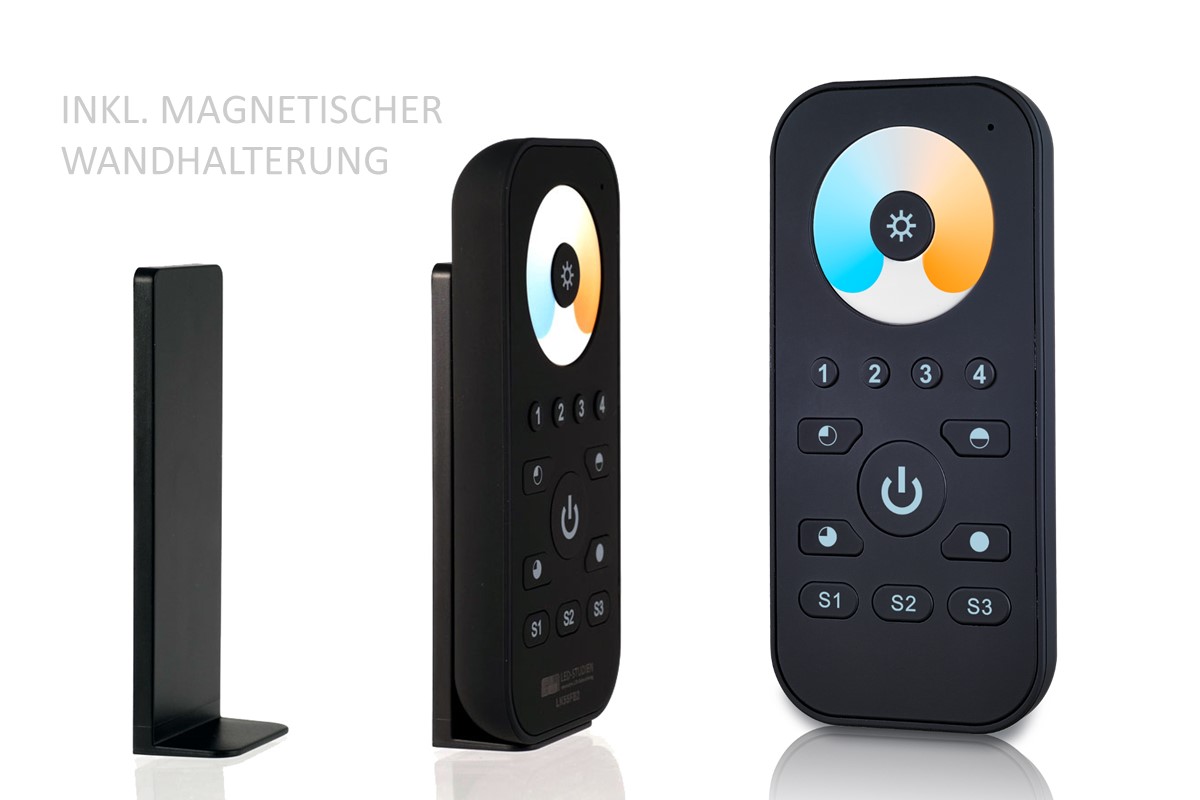 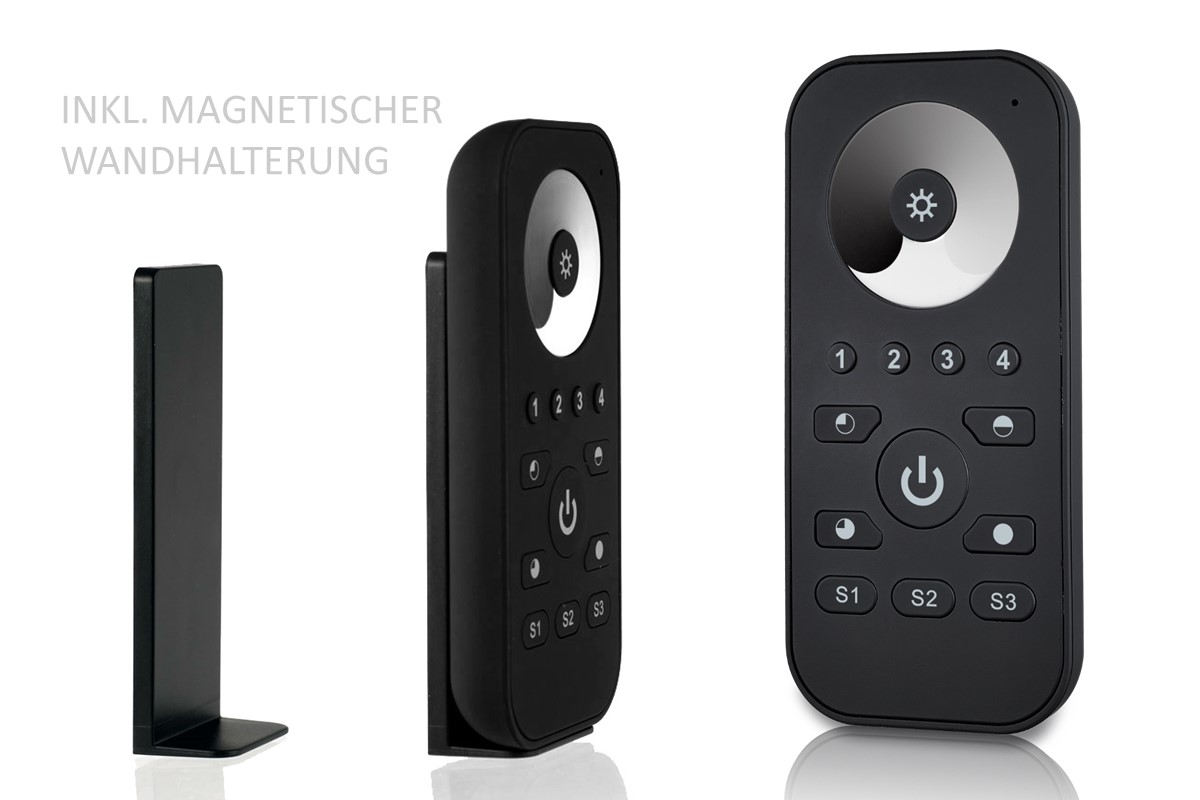 Handheld remote control touch wheel | 4 zones
Brightness control up to 4 light zones operateable Touch wheel for adjusting the brightness 1 Channel 3 memory keys for individual settings All remote controls can operate all drivers / receivers of the LK55 series and, if required, also the WiFi driver LK35. It is also possible for several remote controls to operate one driver. E.g. a handheld remote control and an additional wireless wall panel or several wireless wall panels at different positions in the room. If required, up to 8 remote controls can operate 1 driver. NOTICE:  The LK55 remote control for pure dimming should not be used in combination with CCT LED strips (adjustable color temperature) or RGBW LED strips, but only for pure white LED strips with fixed color temperature. Background: When dimming via you would lose all color settings here, because the LED drivers drive all outputs (RGBW or WW/KW) down or up identically. Instead, dim via the appropriate CCT or RGBW remote controls.   Technical data:  Item no. LK55FB1  Power supply 3 x 1,5V AAA batteries  Dimensions (LxWxH) 120x55x17mm   Operation:   This video explains the functions of the LK55FB1:
Product number: LK55FB1
€49.00* 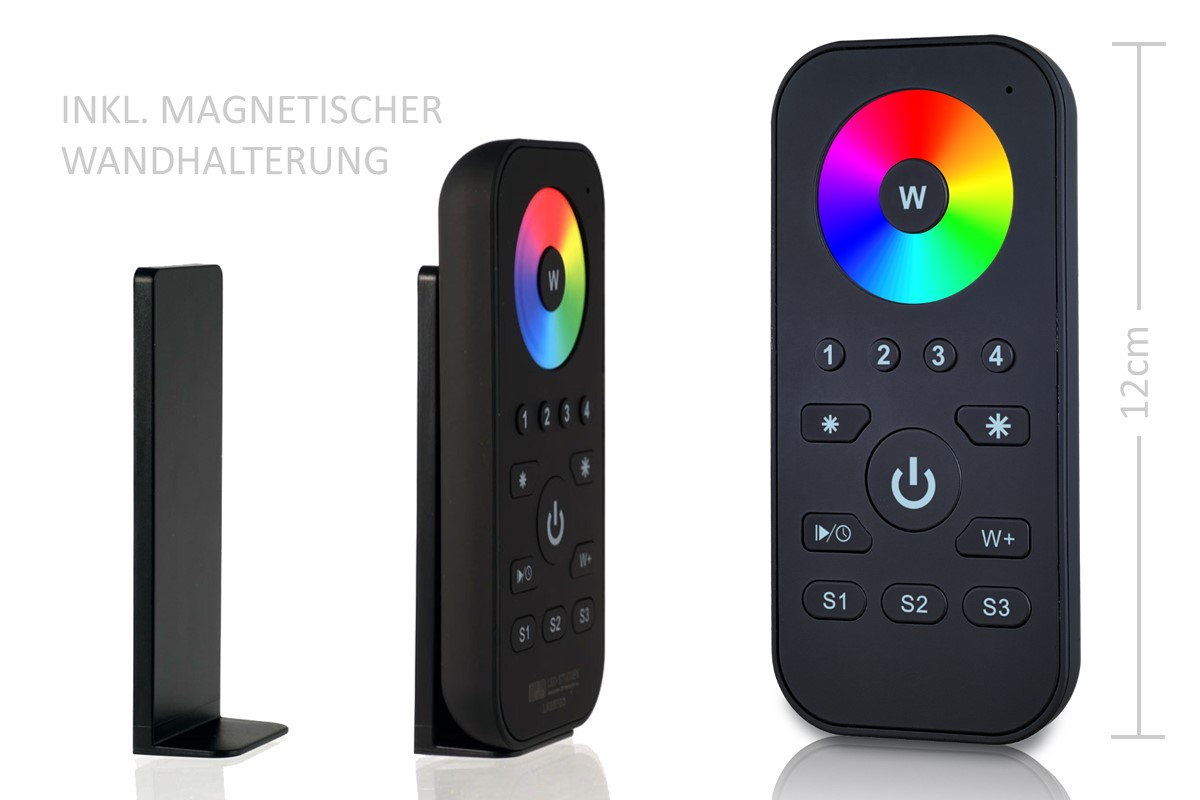 Remote control, with touch wheel & buttons | 4 zones
Control of color & brightness, up to 4 light zones controllable Touch wheel for color selection Separate dim button for white LEDs 3 memory buttons for individual colors All remote controls can operate all drivers / receivers of the LK55 series and, if required, also the WiFi driver LK35. It is also possible for several remote controls to operate one driver. E.g. a handheld remote control and an additional wireless wall panel or several wireless wall panels at different positions in the room. If required, up to 8 remote controls can operate 1 driver. The range of the radio signal is up to 25m. Visual contact is not necessary. Solid walls made of concrete, brick or similar naturally weaken the radio signal. Technical data:  Item no. LK55FB3  Power supply 3 x 1,5V AAA batteries  Dimensions (LxWxH) 120x55x17mm   Operation:
Product number: LK55FB3
€49.00* 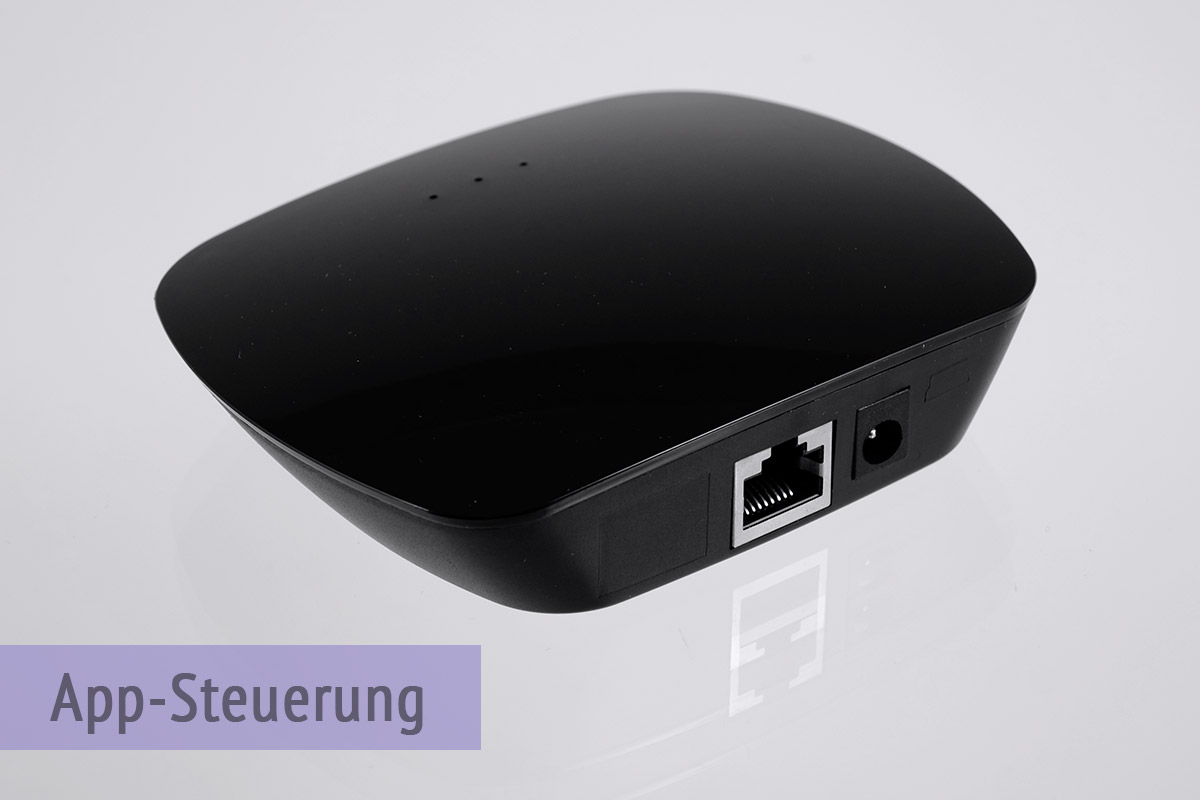 App control: WLAN converter for LK55 driver
This converter from WLAN to the LK55 radio standard makes it possible to control the complete LED lighting via smartphone.A selection of suitable apps for Android and iOS is available: EasyLighting App for Android / für IOS RealColor App for Android / für IOS The WLAN operation is carried out in the standard via its own access point, which is integrated in the converter. This is the state of the art. In addition, the converter can also be set as a WLAN client via an integrated configuration page. This is a novelty in this device class! Thus, the converter is connected to an existing WLAN at home and provides its services without changing the network. A particularly fast integration results when the converter is connected to the existing WLAN via the built-in, classic RJ45 network connection by cable. The apps then find the converter automatically and no configuration is necessary. Technical data:  Connection: 12V DC mains input, RJ45 network jackIP class: IP 20 Dimensions (L*W*H): 110*85*24mm A suitable power supply is included in the set. Functionality of the app In the following video the app is shown in combination with the LK35 WLAN driver. However, it works identically in combination with the LK55bridge:
Product number: LK55bridge
€89.00*
This website uses cookies to ensure the best experience possible. More information...